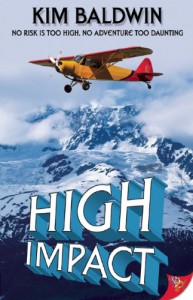 As a general rule of thumb I like books written by Kim Baldwin, however I found that I didn't particularly like this one. I suspects it's because I really didn't like either of the main characters. I disliked the way Pasha was portrayed and felt that the way her "gift" was handled struck me as cartoonish and unfortunately that feeling never went away. On the other hand, I hated the Emery character almost immediately but as the story progressed she started to become a little less 1 dimenstional.

Ultimately, for me it was just an ok story.
Tweet